A Satchel Full of Joy

GAiN Brings Hope and Joy to Children Around the World 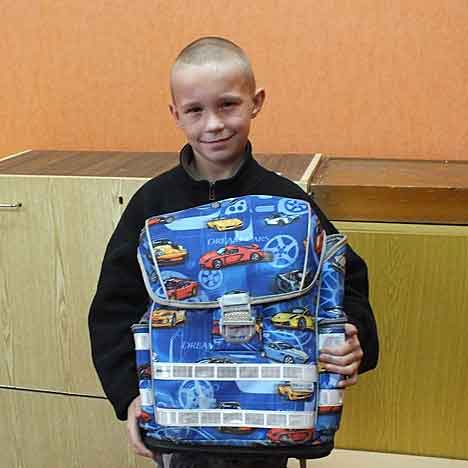 Our humanitarian aid partner GAiN is active around the world, providing disaster aid after natural catastrophes, humanitarian aid materials to people displaced by war or persecution and helping with sustainable community development projects that motivate people to rebuild their lives long-term. For many years, GAiN has collected good used school satchels for distribution to children in other countries.

In August 2014, GAiN delivered 120 school satchels to their partners in Lithuania. The children who received the satchels were very happy; eight-year-old Titas was one of them.

Here is his story:

Titas lives in a small town called Panemunis. He is in the second grade and attends Kazliškis Primary School in northern Lithuania. His mother Lina had called our local representative a few times to ask when the next delivery of satchels was scheduled; she wanted to make sure that her two children could each have one.

Lina is a single mother of two boys – Titas and Donatas, aged 15. She had to leave both the boys’ fathers because of their alcohol addictions. As their town is too small to support any kind of industry, Lina has no job and no income. The family gets by on the vegetables they grow in their own garden; the family cow provides milk, and two pigs will end up as meat on the table one day. Titas’ grandmother gives the family a portion of her pension – about €50 per month.

Titas is an eager student and does especially well in maths. His teacher has already said he has the potential to study engineering or mathematics one day. He is an active child and enjoys sports at school. He especially likes race cars, and nothing would make him happier than to receive a school satchel with cars on it.

He was so happy about his satchel! For him, the ruler and the arithmetic workbook were the best things inside. Titas’ brother also got a satchel, but he was less excited to receive it. Instead, he was worried about getting teased by classmates when forced to admit that his family was too poor to buy new school supplies.

For their mother, this kind of gift means one less thing to worry about in life and allows her to provide for her sons’ education.

A Welcome Gift for Children in Senegal, Iraq and Haiti

Along with other projects and distribution of humanitarian aid materials, GAiN is often able to hand out good used school satchels filled with new school supplies. Recently, children in Senegal, refugee camps in Iraq and at the existing project location (Ça-Ira Orphanage) in Haiti all received satchels.

Ir a: Be Encouraged Ir a: All it Took Was a Hailstorm