As the project comes to an end, the team
look back on a great missions adventure!

Three French girls and one Finnish guy travelled 1100km on 17 planes and one ferry and visited 4 different islands over a period of 10 months on the Mediterranean EuroSTINT project.

They spent 30 hours each week interacting with students – both those who called themselves Christians and those who did not. «It was the best adventure of our lives,» say Cherline Louissaint and Claire Albert, EuroSTINTers who have just completed their mission.

Many things were still unknown when the team left in September 2014, but but one thing was clear: the vision and mission. The goal was to find Christian student leaders in Corte (Corsica), Palermo (Sicily), Nicosia (Cyprus) and Malta, to build an Agape student movement on their campus. The team kept their focus on that goal, but they also managed to cultivate trusting friendships with students wherever they went.

Corte (Corsica) was the first location the team visited. In many cases, getting started is the most difficult part while the team is learning how to live and work together in an intense ministry environment, in a new location that you’ve never been to before and with people, whom you know very little about. The team also discovered that Corsica has a unique culture and perspective on spiritual matters, including suspicion of foreigners, and sometimes including strongly held superstitions or occult traditions.

Despite these challenges, the team visited campus each day looking for opportunities to interact with local students. As a result, they met two Corsican Christian students - Roch and Jean Marie, who are willing to step into leadershipto launch an Agape student movement in Corte. Both Roch and Jean Marie are new believers who benefitted from working with the EuroSTINT team as well as Jeanette Rice, and experienced campus team leader working in Montpellier (France) and coach for Corsican students. It’s wonderful to see these young leaders grow with encouragement and support of others. Jean-Marie was recently baptised in his new home church. These two new movement-builders are already getting more people involved, like Marie and her fellow students from Corte. 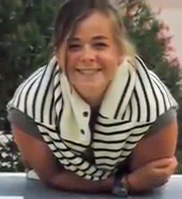 EuroSTINT changed my life! If I could, I would recommend it to every Christian and every Agape staff member.

Click here to read the rest of the story

After leaving Corte, a small campus town, the team went to the busy and crowded city of Palermo (Italy)! The students and other Sicilians they met were friendly, hospitable and spiritually open. God used Naomi, a friendly student who did not identify herself as a Believer in Jesus, to lead team to Gaia, who has been working to cultivate an Agape Movement in Palermo since October 2014. Gaia  is passionate about sharing Christ with other students. She is a dynamic leader, who seeks to inspire others and equip them to share their faith.

The EuroSTINT team had many opportunities to make a visible impact on a campus. In Palermo, students noticed their activities and took the initiative to do the Soularium activity. One of Italian girls, who described herself as an atheist, obviously wanted to go deeper. Cherline told her about the love of God, and she asked how she could experience it personally. Cherline shared her own faith story, and tears filled the eyes of the young Italian woman. They finished that meeting with a warm embrace. Before they parted, she shared that she had wanted to smoke marijuana and «waste some time talking about superficial things» with her friends in the park that afternoon. As an atheist, she had never thought about Jesus Christ as the answer to her life questions, but now she’s considering Him.

Cyprus brought some unexpected surprises as team members realized they needed to adjust their strategy in order to connect with students in a new city. It took more time to break down barriers and build friendships with Cypriot Christian students than in Palermo. The team first made contact with international students, who were hungry for training in how to share their faith. Still, the ultimate goal was to make sure that there is a team of local students in place to reach the campus. During their stay, friendships with Cypriot Christians also developed, but no clear student leader emerged to take ownership for building a campus movement. Our hope and vision for Cyprus remain, and the team left knowing that they had done important work there.

It took a hailstorm to identify a student leader in Malta, literally! One afternoon, the EuroSTINT girls were stuck indoors with other students because of a hailstorm. As a result of this unexpected interruption, they connected with Marie Claire, who has taken leadership of the new Agape Movement in Malta. She is an ideal student leader type: outgoing, passionate, loves the Lord and is a natural leader. She has already begun mobilising other students to share their faith on campus. Now she is looking for her own replacement as she graduated from Malta University this spring. Still, her short-lived efforts created a great foundation and generated evangelistic momentum for Agape Malta.

Throughout the EuroSTINT project, there were many faithful «behind-the-scenes supporters», who were not directly visible on campus, but provided necessary coaching and encouragement from afar. Our team of Staff Coaches played a significant role, with one person taking responsibility for each island. These experienced campus leaders gave direction to new student leaders, provided training and set a good example by going with them onto campus and modelling good movement building practices. Jeanette Rice (France) worked with the student leaders on Corsica, Sam Leopold (Italy) helped with Sicily, Sara Martson (UK) supported efforts in Malta and Becky Arvan (Latvia) was responsible for Cyprus. They continue to encourage and train local leaders on Skype after the EuroSTINT team has left, and they will visit these fledgling groups for in-person training in the near future. This ongoing expert input is essential to keeping new student leaders equipped and motivated for the task.

Looking back on the past year Claire Albert, EuroSTINT team leader, explains, «EuroSTINT is  training for leadership, but I would say also for life in general. It's a step further on the path of sanctification ».

It was a step of faith from the beginning, admits Tero Koho, «It required me to trust in the Lord to provide financially, to trust Him to raise up people and [for me] to live in uncertainty.» Nevertheless, EuroSTINT is not only about starting new campus movements, but also about developing new leaders. This project was a risk and an adventure, although the approach was first used by the Apostle Paul, who went out in faith, expecting God to do great things and looking for opportunities to get involved in places where He was already at work.

Ir a: Be Encouraged Ir a: We Deliver a Simple Message