“My Girls have become Multipliers”

Cy and Diane Farmer have been on staff with Campus Crusade for Christ in various ministry roles for 43 years and spent all of it overseas. They joined the staff in 1973 and spent their first 2 years in Liberia teaching school and having a student and church ministry. Then they moved to the Ivory Coast in 1976 to join Canadian couple who was launching the ministry in French speaking West Africa.

Today they serve with Agape in Western Europe, working out of France. The Farmers had the opportunity to return to Abidjan, the Ivory Coast in 2015 to celebrate the 40th anniversary of the ministry, and they were amazed at God’s faithfulness in growing and preserving the ministry that they were a part of in the 1970s and 1980s.

"It has been 31 years since we left the Ivory Coast. We spent our young adult years there and all of our children were born in the Ivory Coast. It was a wonderful homecoming, especially since we were able to see many of the people we loved and visit many of our favourite places. So much felt the same, yet we hardly recognized anything because so much has changed. New structures have replaced old ones; bridges and wide, divided highways have been built, making us think we were in Europe at times….yet sadly the damage from the 10-year civil war was evident too. The city has expanded to encompass all the outlying towns and grown from 2 to 5 million.

The thing that touched both of us the most during the week was the faithfulness, perseverance and zeal of the Christians, particularly during the 10-year civil war. Campus Crusade had no Ivorian staff in 1984, only a handful of Americans building on the ministry that had begun in 1975. Those who came after us did such an incredible job of discipling and training students and others in ministry skills. Campus Crusade now has many full-time Ivorian staff as well as associates and volunteers. There are ministries to university students, athletes, women, churches, and the military. They continue to use the Jesus film in many languages and have begun using the Internet to reach people with the gospel. 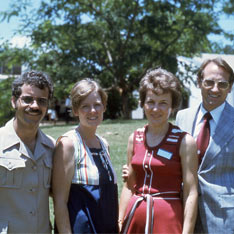 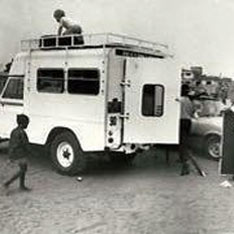 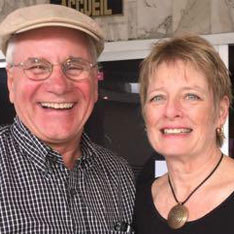 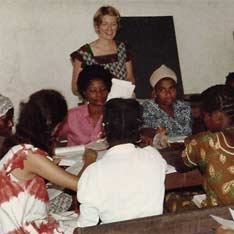 We had the joy of seeing first-hand how much the church has grown everywhere. There are very few foreign missionaries now. From the beginning in 1975, Campus Crusade has worked hand in hand with pastors and churches of many denominations and been committed to helping believers integrate into Bible teaching churches. At the celebration, many pastors shared how God had used this ministry to strengthen their churches and help them grow through giving training in evangelism and discipleship and using the Jesus film."

Cy spent the majority of his time during our 8 years working with students and churches doing evangelistic training and eventually helping the local churches collaborate & prepare 2 citywide campaigns using many means of evangelism including personal witnessing and the Jesus film.

For 7 years, Cy also spent many, many, many hours, repeatedly going to numerous administrative offices trying to get Campus Crusade for Christ approved by the government as an official ministry. This was important if the work was to continue. We learned later that we were one of the last to be approved and any new ministries could only come into the Ivory Coast under the umbrella of an existing, approved ministry. Cy received the official paper right before leaving the Ivory Coast in 1984!

“So neither is he who plants anything nor he who waters, but only God Who makes it grow and become greater.”

We didn’t have money to buy one of the fancy, portable 3x4 meter screens, so Cy figured out how to make one with the help of an African welder. Diane bought some thick, tarp material used by truckers and sewed a 3x4 meter screen on her little, portable sewing machine. We bought an old Land Rover ambulance and transformed it so we could set up the projector on top, out of harm’s way. The Land Rover has long since died, but the team is still showing the film around the country in 8-10 languages.

About 6 months after our arrival in the Ivory Coast, with the blessing of our African pastor, I started a Sunday school class with the 2-3 teenage girls in our church. After teaching them how to share their faith with others, we went out into the neighbourhood around the church to share with those we met. Fairly quickly there were 5 committed girls whom I began to disciple, and they were the focus of my ministry during our 8 years in Ivory Coast.

They were teenagers when we met, but by the time we left in 1984, one was married and another in university. Through the witness of these girls, our class grew to about 35-40 girls, and 2 of my girls began teaching the class sometimes. I turned it over to them when we left. We studied many topics besides spiritual multiplication, including Christian marriage, since most did not come from Christian homes. They were like daughters, especially those in my discipleship group. When we were transferred to Paris suddenly in 1984, I did not even get to tell most of them goodbye.

Now, 31 years later, I did not know what to expect. I knew one of “my girls” was in Abidjan and wanted to see me, but other than Henriette, I did not know where the others were living. Henriette had become a doctor and was living in Abidjan and had invited us to dinner. When we arrived for dinner, another surprise awaited us. One of my other “girls” walked out! Adele was married & had a family. When she found out that morning that I was in Abidjan, she immediately took a local bus and rode 4 hours to see me. It was more than I could have hoped for to see 2 of my “girls”. An indescribably, happy reunion sharing memories and photos and catching up with what had happened in our lives the past 31 years. I said I was sort of a mother to them and they countered with, “Not sort of, you are our mother; you taught us everything!”

They overwhelmed me as they began to tell me with excitement how they had kept their notes from all our Bible studies and all kinds of other things we did together and told me how they had tried to put these things in practice. They had taught these things repeatedly to other young girls.

We had done so many things besides Bible studies together. They would teach me African cooking and I would teach them other things they wanted to know how to do.

Henriette ran to the kitchen and brought out the original recipes for yogurt & cakes & other dishes I had written out for them. Then Adele showed me a photo of a beautiful cake she had made and told me how she decorates cakes now. (I had forgotten she had asked me to teach her.) I am thrilled to think she might be making some money doing it. They talked about one thing they observed about raising children, particularly struck about my disciplining our children in private rather than in front of others, and told me they had followed my example and tried to do the same with their children. Being the eager learners they were, it made me wonder what else they may have observed in me that may have not been such a great example.

“Not sort of, you are our mother; you taught us everything!” 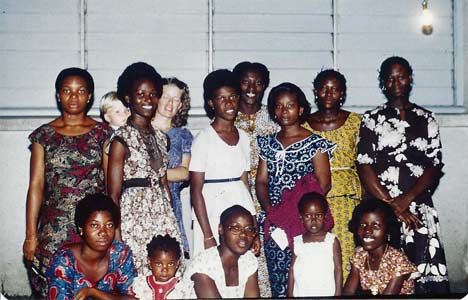 A Confession about Napkins and Cushion Covers

Then Adele confessed there were 2 things she hadn’t managed to do that I had taught her. I sensed she might be afraid I would be disappointed with her. I had to laugh when she said she had never been able to fold pretty napkins for her table or sew cushion covers for her furniture. I reassured her that those were of absolutely no importance whatsoever!

Hearing how they had tried to pass on what they had learned was very humbling and underscored the solemn responsibility it is as we disciple others to teach the Word accurately, to help them become dependent on the Lord, not on us, and to be good examples so that as God multiples Himself through them it honours Him. I ended up getting to see 3 of my 5 “girls”. I learned that one had passed away but each of the others heads up the women's and girls’ ministries in her church, one is a pastor’s wife.

These were unforgettable days and we are so grateful to God for allowing us the blessing of glimpsing some of the fruit of seeds sown 40 years ago, that others nurtured and sowed more seeds, and view what God did with it.

Not only had many learned how to do ministry themselves, but they had embraced being multipliers in the Kingdom!

This is what we had longed for when we went to Africa in our twenties.

Agape Europe joins Cy and Diane in thanking God for this opportunity to see the fruit of their labours!

Ir a: Be Encouraged Ir a: Internet Outreach in Lithuania