Can one week wreck your college experience?

by Ross McCall (Agapé UK staff member working in the US, where Agapé ministry is called Cru.)

It felt like the promised land.
I was away from home, alone, in a city known for it’s music scene and nightclubs.

As I stood in the middle of the campus on my first day at Manchester University in England, swarms of excitable students buzzed around me.

I didn’t know it at the time, but I arrived at a moment in my life that seemed to set the course for the next 4 years.

Just like the first chapter of most books sets the course for everything that follows, your first few weeks at university will define much of what’s to come.

I chose the bar.

The next four years of my life as a student were consistent with the choice I made on day one.

It might be one decision like mine, or a series of choices you make that matter. Did I wreck my university career on day one? Not exactly. I lived the life I wanted to live on the day I arrived in Manchester. I just don’t have much that’s good to show for it today.

You arrive feeling like a blank page. I can be who I want and do what I want like never before. I’m a story waiting to be written. But what kind of story?

“The first 6 weeks in a student’s life are irreplaceable,” says Aaron Emerson, a Cru staff member. “This is the time when students are the most open to new friendships and when they are setting up their first year’s schedule. That schedule often carries over into the rest of their time at university.”

Maybe you’re like Erva, who arrived at the university with little exposure to the Christian faith.

When Erva arrived at the University of New Hampshire a year ago he met Nic, a Cru staff member. Erva was initially cautious about someone connected to a faith-based group. But an invitation to a men’s “rock climbing and shooting day” overrode his reservations. “I had a blast, loved it!”

Erva joined a men’s Bible Study, then checked out the weekly Cru meeting, intrigued by the worship experience there. A short while later Erva put his trust in God.

Or maybe you’re like Lucile who arrived at university as a Christian with a choice whether to keep following her faith or fall away.

Lucile arrived at the University of Pierre and Marie Curie in Paris convinced she would never find another believer on her campus. She could easily have blended into the crowd. But when she heard one of her friends explaining to a Cru staff member why students in France don’t practice religion, she raised her hand and said, “That’s not true, I’m a Christian.”

Lucile chose to stand out from a crowd and became passionate about finding students in Paris with a desire to find out more about Jesus. The first week set the course for Erva and Lucile’s time at university. 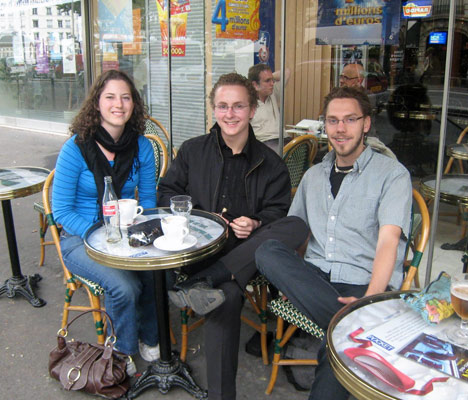 How is your chapter one going to influence the rest of your story?

1. It matters who you know

The friends you choose will shape your college experience. Freshman students in those first days on campus often look like herds of over-excited sheep searching for shelter.

I looked for it among a wilder crowd, and turned my back on some wise friends. I chose friends who wanted me to validate their lifestyle choices rather people who truly cared for me.

Get connected with Agape on your campus. Visit the Building Movement website http://www.buildingmovements.com.

Why not pause and write a list of your hopes for your university years?

What kind of person do you hope to be?

How do you want to invest your time?

Perhaps you want to write for the college newspaper, join a particular club or serve in the local community. How do you want to use your vacation time?

Plenty of students around you will be swept up in the tidal wave of campus life, especially as freshman.

Choose to swim upstream and set a course you will be pleased with when you graduate.

I heard a marketing specialist say that the millennial generation has a tendency to think short term. They consider their future as far ahead as the average phone contract.

You don’t get this time back. College is a time in life that offers opportunities like no other.

When I stood on the stage wearing the cap and gown for my graduation, I knew I’d enjoyed being a student. But I also knew how unprepared I was for anything ahead of me.

Go to: Be Encouraged Go to: The Mystery of Prayer