From Bologna to Milan 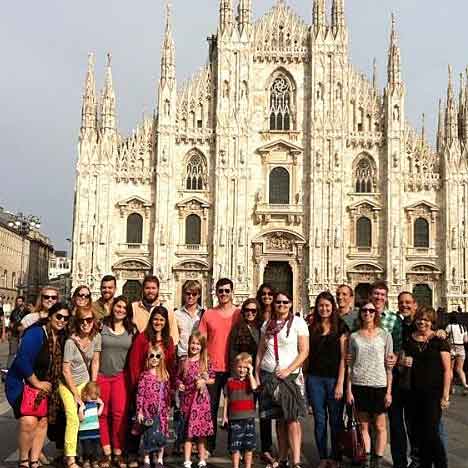 Innovation and initiative with God's guidance - this is the approach of Agape Italia as they expand their horizons to become active in more cities throughout Italy.

The national leadership team at Agape Italia are always looking for the next step or an open door for a new outreach, a new partnership, or activities in a new location. This year they sensed a call to go to Milan. Although several short-term summer teams have been there in the past, this year they wanted to move forward to increase the presence of Agape Italia presence in this key city.

Milan is the second largest city in Italy and is home to 1.3 million people – including 7 universities with 185,000 students.

It is a European center for fashion, music, finance and industry.

Last year, Agape Italia spent time meeting and praying with Milanese pastors and partners, as well as assessing the university situation. Last spring, when they realized that a dozen new interns from the US were coming to work in Italy at the Bologna university campus, the leadership decided to take advantage of the large team and begin regular outreach visits to Milan.

Now the Bologna team makes weekly visits to Milan, taking the train an hour each way to meet students at the Polytechnic University of Milan. Originally, they hoped to meet students who were already firm in their faith and who would be interested in helping pioneer a Christian group on their campus. However, since beginning campus visits this fall, they have already met FIVE students already who have a strong faith and several of those are excited about starting a group! This is a great answer to prayer, because in other cities this process has taken months or even years.

Please join Agape Italia in praying for the team as well as the new students who are interested in getting involved. They continue to hope and work toward having a permanent team in Milan, to share the message with more students at the Polytechnic and other universities as well as leaders in industry, music, finance, fashion and beyond!

Go to: Be Encouraged Go to: Take up the Challenge