A Return to What Matters

So that’s what he did -- until God changed his heart.

Warner, 19, is a second-year student at the University of Oxford in the U.K. and attended the Agapé Student Summit last month. He has been leading with Agapé on his campus over the past year, but just a few years before meeting Agapé, Warner had rejected his Christian upbringing.

“Drinking, smoking, doing drugs. I was just doing what I wanted to do,” Warner said. “It got to the point where I was smoking weed about four or five times a week.”

This lifestyle was taking a toll on his mental health, Warner said, and he was constantly tired, struggling with anxiety, and “generally in a pretty terrible place.”

Warner said he knew he needed to stop, but felt that this lifestyle gave him a sense of value, purpose and community.

The turning point came when Warner’s parents stayed home from a holiday they were planning to take for their 25th wedding anniversary -- they were too worried about Warner to leave.

“I went out in the evening, and I came back, walked in the front door, and as soon as I stepped in the door, my mindset just completely changed,” he said. “I didn’t want to change, it wasn’t a choice that I had made, it was completely from God.”

After Warner’s mindset flipped, he said his faith deepened through conversations with a classmate who rode with him to school each morning. The classmate was a son of the vicar at Warner’s church, and the two would discuss faith while driving to school.

“That just really helped me grow in my faith and give me good grounding. I had to kind of build up from the bottom again,” he said.

Warner said his girlfriend also helped him grow closer to the Lord, and after she and Warner’s friend got baptised, Warner chose to do the same last year.

Warner said he was surprised by his acceptance into the University of Oxford, and has since seen God’s purpose for it through his friend Max.

Max grew up with a religious background, but never had a personal faith, Warner said. He opened up to Max about his faith -- a conversation that deeply impacted Max.

“Just perfect, perfect timing,” Warner said. “I remember him saying to me that that was...exactly what he needed to hear. I didn’t do anything special, I just had the right conversation at the right time.”

Warner’s friend started attending church with him, and at the end of his first year at Oxford, he said Max decided to become a Christian.

Warner said he met Staton after attending a student night at a church near his university. He said he didn’t feel like he connected well with the church group, but later Staton messaged Warner to meet up for a coffee.

Warner said he and Staton began to meet up regularly during the school year. Eventually, Staton asked Warner if he would want to become a student leader with Agapé at Oxford.

“It’s given me, kind of, more confidence in my faith,” he said of his involvement with Agapé. “I know that I’ve got Jonny, who is a really great leader, he’s very positive and always encouraging me.”

Initially, Warner said he wasn’t sure about leading, but felt the need to serve and live out his faith and saw that Agapé could be a good way to do that.

“I started this year as a student leader, having absolutely no idea what I was doing,” he said. “It’s been good fun.”

Warner said he enjoyed learning about the greater vision of Agapé at the summit and said it helped him understand why his role as a student leader is important.

“That’s been just really awesome to see, to give me more of a direction,” he said. 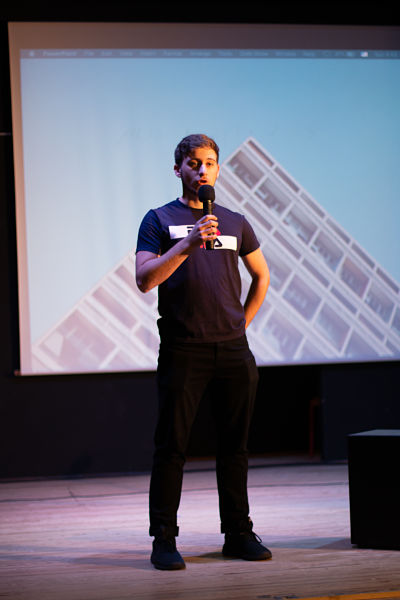 About the author: Olivia Johnson serves in Paris, France with Agape France on a one-year STINT. She lives with other interns and helps university students in France encounter God's love for them. Olivia studied journalism at the University of Minnesota in the USA. She enjoys writing, travelling and encounters with cats, though none could be as lovely as her own feline.

Go to: Be Encouraged Go to: Worldwide Day of Prayer 2019